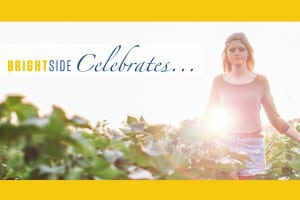 Meagan can still remember the first pain pill she ever took. On the day of her high school graduation, she took a Vicodin. She loved the high so much she soon tried OxyContin and other pain pills.

Growing up in Missouri with divorced parents who let her live a “free range” childhood, Meagan started experimenting with drugs around age 14. She started with alcohol, then pot, and then turned to pills.  “I was just trying to find different highs and everyone was doing it. I’d try to quit taking them; it wouldn’t work. I’d get off them, go back on them,” she said.  At age 21, Meagan’s father passed away from brain cancer. She relocated to Illinois to be closer to her mother and soon began using heroin. At times, she managed to remain clean for about a month, but would quickly resume using. This cycle continued for eight years.

Meagan used to spend $100 everyday on her habit and would disappear for days leaving her mother to care for her two young boys.  “I used to dread coming home to take care of my kids because all my time and energy were spent on how I was going to get money, to use, to not get sick. How was I going to use for the rest of the week,” she worried.  After a tornado ripped through her community, Meagan received around $5,000 in monetary donations to help her get back on her feet. Instead of putting the money toward a new home, clothes and belongings, she spent $2,000 of it on her heroin habit.  “I was blowing through that money. People were questioning me. I was sick of using and watching all the money fly right out the window,” she said.

Meagan finally decided to make a change for good. While high, she told her dealer she didn’t want to use again.  “I wanted to fight for my life. I was sick,” she said.  She thought of her children and how her addiction affected them.  “I thought, if I don’t stop now, my 11-year-old might think it’s ok to use because mom does it,” she said.  After calling about 15 different rehab facilities in two days, Meagan was disheartened because all of them had a waitlist of at least one month. Brightside was the last call she made.

Meagan has been clean for six months since starting treatment at Brightside. With the help of the Brightside staff, she has a new perspective on her drug addiction.  “It’s not going to go away in a year. It doesn’t work like that. It is a disease I will have for the rest of my life,” she said.  When Meagan was in the depths of withdrawal, she had people from Brightside constantly checking on her.  “I’ve been to rehabs before and I’ve never felt the connection like I do here. Doctors at other rehab facilities would just say they would see you in a month,” she said.

Her treatment at Brightside includes Suboxone, a medication that virtually stops withdrawal symptoms and cravings from opiate drugs like heroin.  “Every day I wake up and take my Suboxone and think this is another day that I don’t have to use.”  Meagan said she feels successful every time she comes to Brightside for treatment.  “They make me feel so good that I’ve made it this far. I look forward to coming here. I look forward to taking the urine test to show that I can do it.”

Now, leading a new life, Meagan said she is able to pay for her boys to play sports; something she was never able to do before she was clean.  “I actually got to be a part of their summer. I’ve never had a summer with sobriety. I can wake up and laugh. Now me and my kids do so much,” she said.  Meagan’s next goal is to remain clean for a year. She’s started writing a book about sobriety and dreams of one day opening her own rehab facility.  “I want to help other people because this is something so hard to get out of once you start, she said.

“Every day now, I wake up and sigh and don’t have to use.” – a great reason to celebrate!

One thought on “BRIGHTSIDE Celebrates…Meagan”